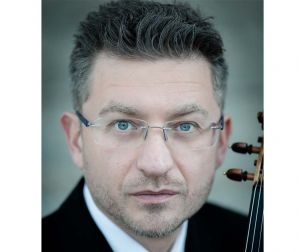 Violinist Bartek Niziol was born in Stettin, Poland, in 1974 and studied under the supervision of Jadwiga Kliszewska in Poznan and Pierre Amoyal in Lausanne. He attended Master Class courses led by Zachar Bron, Ruggiero Ricci, Mauricio Fuks and Michael Frischenschlager.

These awards enabled him to debut as soloist with orchestras such as English Chamber Orchestra, Orchestre Philharmonique de Radio France, NDR Hamburg, New Japan Philharmonic, Sinfonia Varsovia and Tonhalle-Orchester Zürich. Conductors with whom he has worked as soloist include Yehudi Menuhin, David Zinman, Marek Janowski, Heinrich Schiff and Krzysztof Penderecki.

Concert tours have taken Bartek Niziol to Asia, Africa, South America and throughout Europe. The New York Times has described his playing as having masterful control and a beautifully singing tone.

As a passionate chamber musician he has appeared alongside such Musicians as Pinchas Zuckermann, Elisabeth Leonskaja and Sol Gabetta, and in August 2011 he was invited to perform with Martha Argerich at the famous “Chopin and his Europe” festival in Warsaw.

Bartek Niziolʼs CD recordings of Wieniawski, Bacewicz and the 6 Ysaye Solo Sonatas have won him the prestigious “Fryderyk Prize” at Polandʼs recording industry awards. Since September 2008 Bartek Niziol has been a professor of violin at the Bern Hochschule der Künste. He also sits on the Jury for the International Henryk Wieniawski Competition in Poznan as well the Instrumental Competition of Migros Culture in Zürich.

He has a special interest in the development of young talent, and to this effect in 2009 he founded the “International Master Class” festival in Piła, Poland, whose artistic director he has been ever since . Bartek Niziol plays a 1727 violin by Giuseppe Guarneri del Gesù.