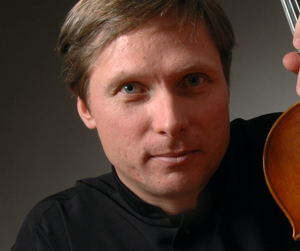 Jean-Eric Soucy has a well established reputation in Europe and North America as a soloist and chamber musician. He tours the world and makes recordings for Sony Classical, Hänssler, Arte Nova, Antes and EMI.

A native of Québec, Jean-Eric Soucy earned his “Premier Prix” in viola and chamber music at Le Conservatoire de Musique du Québec. He also won a top prize at the Lionel Tertis Viola Competition in England.

After over 28 years serving as 1.Solo-Bratscher for the German radio SWR Symphonie Orchestra, he now dedicates himself to coaching orchestras, masterclasses and recitals through Europe and abroad.

Before joining the SWR, Mr. Soucy was assistant principal violist with the Vienna Chamber Orchestra and principal with L’Orchestre Mondial des Jeunesses Musicales, the Canadian Chamber Orchestra, the Quebec Symphony and Les Violons Du Roy that he co-founded with Bernard Labadie. He served as guest principal violist in over 30 different orchestras: the Bamberg Philharmonic, NDR Hanover, Gewandhaus Leipzig, HR Frankfurt, Basel Symphony and the Opera and the Tonhalle orchestras in Zürich to name few.

Jean-Eric is a passionate and dedicated teacher. He has taught in summer academies in Bruges, Belgium, at Le Domaine Forget in Québec, in Feldkirch, Austria, at the SOAP in British Columbia and has held teaching positions at Le Conservatoire du Québec (1987-1991) and at the University of Karlsruhe (1997-2003). He has organized many international viola symposiums in Québec and in Austria. He has also given master classes in Canada, Germany, Austria, Belgium, Brazil and Australia.

Soucy founded and directed (1989 to 2003) one of the foremost chamber music festivals in Canada. Le Rendez-Vous Musical de Laterrière was a meeting point for musicians from Europe and America. The festival provided an opportunity to rediscover music from sometimes forgotten composers as well as to indulge in the great chamber music literature.

A dedicated chamber musician, Jean-Eric Soucy regularly takes part in chamber music festivals throughout Europe, America and Australia. He is also a founding member of the Inukshuk String Trio with fellow Canadians Phillip Roy and Bridget MacRae with whom he has performed for the German, Swiss and Canadian national broadcasters.