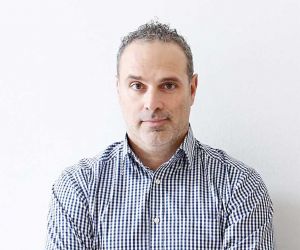 Georgios has a background in Classical Music and holds a Bachelor’s degree (Diploma) in Opera Performance. His constant interest in developing his vocal technique and acting skills in opera brought him in contact with the Alexander Technique at the Juilliard School in NYC.

Experiencing a significant change in his operative performance and his life as a whole, he decided to study the technique. After three years of training, he graduated from the world-renowned Balance Arts Center in New York and became a certified teacher and a member of the American Society of Alexander Technique (AmSAT).

For the past eleven years, Georgios has also been a music teacher and director of private schools in New York and Connecticut and a tenor in various performances with the Dicapo Opera, dell’Arte Opera Ensemble, Regina Opera, Opera Manhattan, Amore Opera, Altamura Center, Thessaloniki Opera, Rhodes International festival, while at the same time he has introduced the Greek Operetta in NY and in Connecticut through performances in schools and universities.

Today, Georgios splits his time between New York (where you can find him teaching at the Balance Arts Center), and Athens, as the co-founder of The Holistic Awareness Center. He is also the creator of the HAC Method, an effective approach that, among others, combines principles from the three methods taught by Georgios:

1) the psychosomatic Alexander Technique, 2) Healing Touch, a method commonly used by nurses in most US hospitals to provide energy therapy and relief, and 3) Breatheology, a method that promotes conscious breathing techniques, which can support not only professionals who need to have excellent breathing control (eg. Olympic athletes, public speakers, CEOs etc.), and people going through rehabilitation, but also everyone looking for simple and practical tools to improve their daily lives and their health.

This year, his collaborations, apart from the Academy of Music in Spetses (MAAKSS), include workshops in Balance Arts Center in NY and in the Lyrical Arts Studio in Athens, weekly classes in the town of Psychiko- Filothei, and workshops at the Faust Culture Center in Athens.