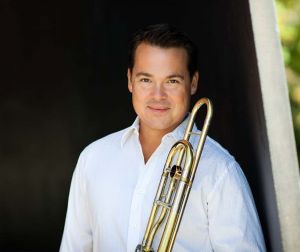 Jamie Williams has served as principal trombonist of the Deutsche Oper Berlin since 2009 and is professor at the Hochschule für Musik und Theater Rostock.

Jamie Williams released his solo debut CD “Voice” in 2013 which received many raving reviews. His concert activities have led him across Asia, Europe, the Middle East, North and South America as both soloist and chamber musician.

Born in 1979, Jamie Williams began playing trombone in his native St. Petersburg, Florida at the age of eleven. In 1997, he received a full scholarship to study in New York at The Juilliard School with Joe Alessi. He continued his studies with Per Brevig, Jonas Bylund, Michel Becquet, and Ian Bousfield.

In 2010, Jamie Williams began as an active Yamaha Artist, in demand for master-classes, and performing on a Xeno YSL 8820. He has been on the jury of numerous international competitions and was voted in for the term of 2014-2018 to the International Trombone Association Board of Advisors. He is currently in president of the German Trombone Association (IPV).

Jamie Williams and his Rostock trombone class were awarded the Emory Remington Trombone Ensemble Prize in 2014, which is the most prestigious trombone ensemble award world wide.