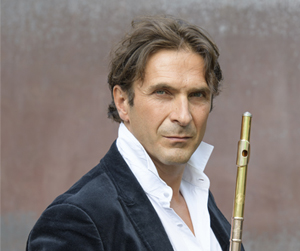 Stéphane Réty began his musical studies in his birthplace Lorient, France. Further studies took him to the conservatory of Nantes (Guy Cottin’s class) and finally to the Paris Conservatory (Conservatoire National Supérieur de Musique de Paris) in Michel Debost’s class, winning a unanimous first prize in flute and chamber
music(Cristian Larde’class) in 1989. First prize winner of the Vierzon international competition, prize winner of the Rampal competition, he has held the position of flute solo in various orchestras including the orchestre de Paris, Monte-Carlo Philharmonic, orchestra of the Zürich Tonhalle, Stuttgart Philharmonic. In 1991, he was appointed principal flutist of the Basel Radio Orchestra. Currently he is principal of the Basel Simphony Orchestra, and of the Zürcher Kammer Orchester in Switzerland.

As a soloist, he frequently appears throughout Europe, America and Asia with Musicians like Augustin Dumay, Katia and Marielle Labèque, Marie-Pierre Langlamet, Wolfgang Holzmair etc…. Amongst other premieres, he gave the first performance of Joachim Rodrigo’s flute concerto in Belgium in 1985 and also the first performance of “Nocturnes2” for flute and string orchestra by Wim Hendericks in Brussels, conducted by Barth Van De Velde in 2001. In May 2005, he gave the world premiere of Lourié’s (russian composer) duo for flute
and piano.

He has made several recordings, including Johann Sebastian Bach’s «Suite No 2 », under the conducting of Rudolf Barshai, the “Brandenburg Concertos ” with the Seoul Chamber Ensemble for EMI, a CD devoted to Debussy for flute and harp with Nicolas Tulliez on the french label Skarbo.

His latest CD release, nominated for the Grammy Awards 2007, is devoted to
J.S.Bach with flute concerto BWV 1056, Trio sonate from Musical Offering and
Brandenburg 5 on Traverso, for Naxos.

Stéphane Réty has been invited throughout the world to give master classes (Europe,U.S., South Korea, Brazil…). In addition, he has been assistant conductor of the Junge Deutsche Philharmonie, and has composed film music, such as the score for the documentary “A star called Ayrton Senna” distributed by TF1 Video. Stéphane Réty is Professor at the “Musikhochschule” in Dresden in Germany.